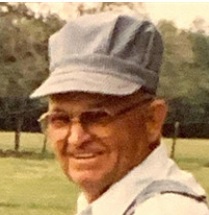 Henry Howard Lamb, 92 of Kissimmee, Florida passed away peacefully at home surrounded by his family on Saturday, November 23, 2019.

Henry was born in Campbell Station, Florida on November 14, 1927 to Charlie B. Lamb and Eliza Agnes Bronson Lamb. He was a lifelong resident of Osceola County. He was in the fourth generation of one of the oldest pioneer families in Central Florida. He was a self-made engineer. His biggest accomplishment was the building and fabricating of one of the first fiberglass air boats. He was a retired well driller and cowboy. He was a Christian. He is survived by his daughters, Janet Lamb O'Berry (Robert), Billie Jean Dunn (John); grandchildren, Christy Smith, Wendy Lawhorn, Trea Cook, Justin Lamb, Nikki Lamb, Jacob Makowski, 4 great grandchildren, and 1 great great grandchild. He was fond of his numerous nieces and nephews. He was preceded in death by his wife, Jean Laverne Tyson Lamb and their son, Glenn H. Lamb and their grandson, Brandon (Bubba) Makowski.

Want to get notified whenever we write about Osceola Memory Gardens Cemetery Funeral Homes & Crematory ?

Sign-up Next time we write about Osceola Memory Gardens Cemetery Funeral Homes & Crematory, we'll email you a link to the story. You may edit your settings or unsubscribe at any time.