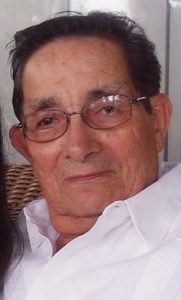 Angel Felix Torres Ramirez, 87, of Orlando, passed away on January 2, 2020 at VITAS Suites at Orlando Health South Seminole Hospital surrounded by his loved ones as he was called to heaven. He was the widower of the late Georgina Torres.

Angel was born on September 7, 1932 to Cleofe and Cirila (Ramirez) Torres in Orocovis, Puerto Rico. His hard work & dedication allowed him to purchase their first home in San Francisco. In the late 80s' they decided to move their family to Orlando, Florida. Some of his hobbies were having garage sales, going to the casinos, gardening, playing dominos, and eating his wives delicious meals, while watching his favorite football teams. Angel Felix decided to get a part time job with Hertz rental car, where he worked for several years until he decided to fully retire, to spend more time with his children & grandchildren.